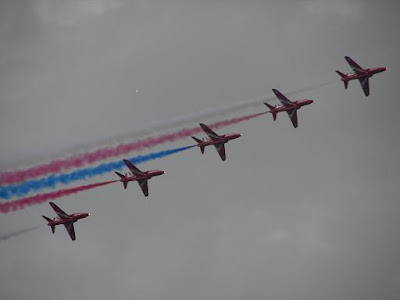 Britain's Red Arrows produced a heart-stopping aerobatic display to round off the first day of the Malta Airshow yesterday afternoon.

The famous RAF team lit up the dull sky over St Paul's Bay with the elaborate manoeuvres that have made them famous throughout the world.

The Royal Air Force, celebrating its 90th anniversary, dominated the show, which included the debut in Malta of a Typhoon fighter, which opened the show.

The aircraft, which has just joined RAF fighter squadrons, demonstrated incredible manoeuvrability, turning "on a sixpence" below the grey clouds before roaring up into them, afterburners glowing.

Another well-known favourite in the afternoon was a Canadair CL-415 water bomber which skimmed the water several times, rapidly filling its huge tanks and then water bombing the bay.

Other participants in the show included the amphibian which operates the air service between Malta and Gozo, RAF Hawk and Tucano trainers and an RAF Kingair 200.

The Red Arrows kick off another flying display over St Paul's Bay today at 2 p.m.

Photo and information from our local online newspaper www.timesofmalta.com
Posted by Dina at 7:03 AM 8 comments: 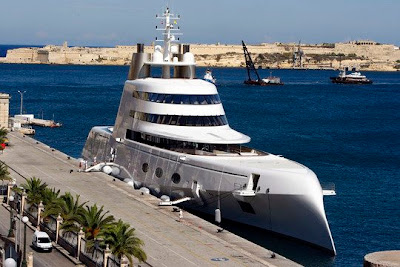 One of the most recently built and unusual yachts to grace the Mediterranean, the 'A' arrived in Grand Harbour earlier today.

The $300 million, 120 metre 'A' was built by the German shipyard Blohm and Voss. It was designed by Philippe Stark for 36-year-old Russian billionnaire Andrey Melnichenko. He ordered it for his wife Aleksandra, a former Serbian supermodel, hence the name 'A'.

Contrary to contemporary vessels, the 'A' is a radical design, mostly enclosed and with the bow sloping out at waterline level, rather than curving down from the main deck.

The superstructure is concentrated in the middle of the hull, giving the yacht the appearance of a giant white submarine when seen from a distance. There is a helicopter pad on the bow and a pool at the stern.


Information and picture both from times of Malta. This weekend Malta is hosting the yearly air show, featuring the red arrows and 2 typhoon fighters of the Royal Air Force that will apparently steal the show. I will try and make it to the shows and maybe post a photo or two.
Posted by Dina at 6:56 AM 12 comments:

For a couple of days (fingers crossed not 10 like the Internet company told me!!) my Internet connection is going to be out of service. Whilst this is being sorted feel free to check out some photos from my early posting days. Let's see how I am going to survive this disconnection :( see you soon my dear friends ......
Posted by Dina at 7:14 AM 9 comments: 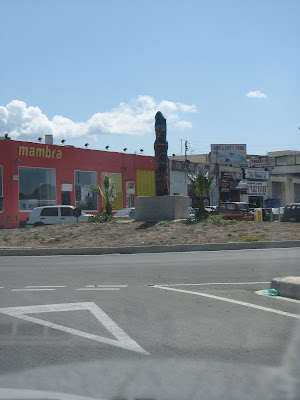 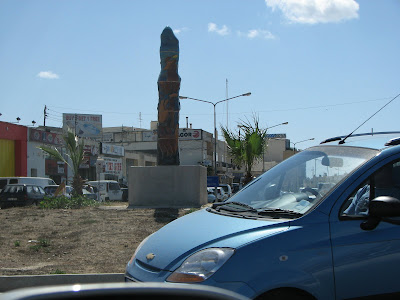 Back in 2006 a modern sculpture was placed to decorate this roundabout which is found on the outskirts of Luqa Village. Artist Mr Paul Vella Critien has exhibited his art pieces internationally and also has street sculptures around the world. This piece of modern art however has received lots and lots and lots of comments!!!!

Now be honest and give me your comments about this piece of 'modern art'.
Posted by Dina at 7:36 AM 7 comments: 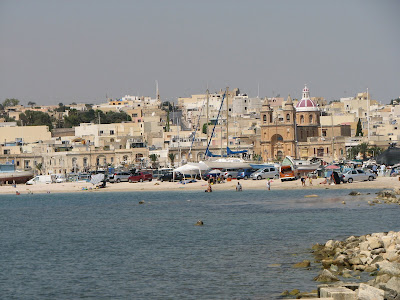 Marsaxlokk is pronounced 'Mar-sa-shlock'. This fishing village has one of the oldest ports in Malta and is the largest with 250 fishing vessels. It's considered to be the most photographed village in Malta. The church you see there is dedicated to Lady of the Rosary 'The Madonna of Pompeii'.
Posted by Dina at 8:28 AM 5 comments: 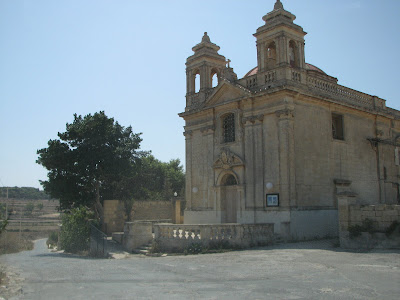 'Tas Silg Church' "silg" means ice and this church is dedicated to our lady (Mary) of the Snow. This is today run by the Discalced Carmelite Fathers. Documents dated 1661 at the National Library in Valletta state that a church called 'Our lady of the Snow' was founded some years earlier by Signor Giuseppe Francesco Gauci. This church must have been a private chapel as it was not included in subsequent documents related to pastoral visits conducted by Church authorities. On April 22, 1933 this church together with adjacent land was donated to the Discalced Carmelites by the Marquis Lorenzo Testaferrata and his sister Carmel Testaferrata Bonici.

This area is located at the end of Marsaxlokk village on top of a hill, between Delimara and Marsascala.
Posted by Dina at 8:30 AM 4 comments: 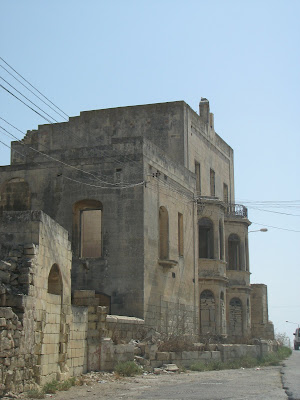 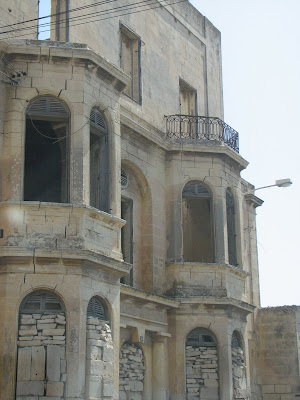 As long as I can remember (which is not really that long :) ), this house has always been here and carrying the title of being haunted. When I was a little girl my father used to take me and my brother for long drives on Sunday mornings and this stop was one of our favourite. We always loved to explore and listen to our dad's ghost stories. Nowadays the entrances to the house have been blocked.
Posted by Dina at 1:05 PM 38 comments: 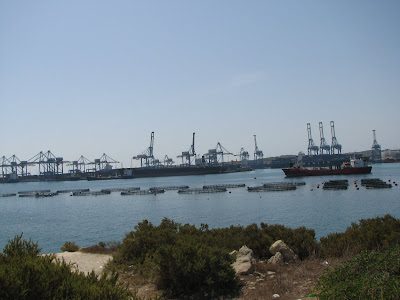 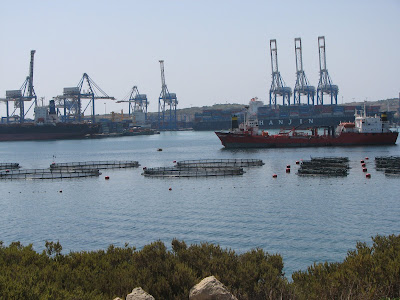 Aqua Culture was introduced in Malta in 1988. In the early 1990's commercial fish farms started producing European sea bass and gilt head sea bream. Maltese companies showed interest in farming the Atlantic blue fin Tuna. This fish farm is found in the southern part of the Island which is the Birzebbuga and Marsaxlokk area.
Posted by Dina at 1:41 PM 13 comments: 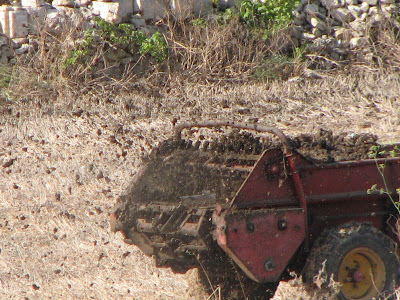 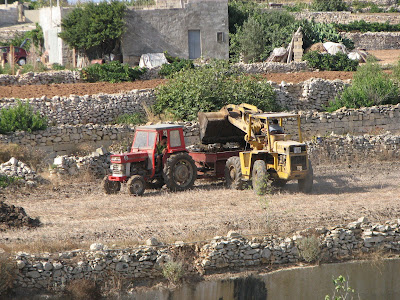 plough, plough and plough......... here are some shots I took of these farmers whilst ploughing. After a dry season it is time for the farmers to turn the soil. It's hard work in the sun and I am glad I can document this from the comfort of my air condition :)
Posted by Dina at 11:23 AM 4 comments:

The Regatta and 2nd Place !!


The Regatta is a typical Maltese Sport because in this event held in September to commemorate the Great Siege Victory of 1565 and it is held on the 31 st March - Freedom Day. Typical Maltese boats like frejgatini, kajjikki and dghajjes take part. The Regatta is the main event for the traditional Maltese boat ( id-dghajsa ). These colourful boat races are popular with the Maltese, especially in the Three Cities of Cottonera, Marsa,Kalkara, Marsamxett and Birzebbuga, the districts which compete in this Regatta. 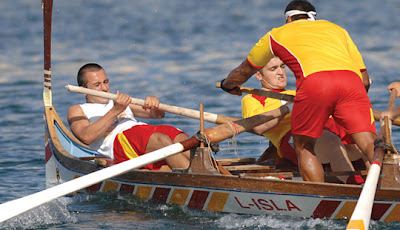 This team won with 88 points, winning all five Category A races. Birzebbuga won 2nd place with 84 points and also won the races for the reserves.

This was the 19th time that Senglea won the coveted shield. Their victory was celebrated by hundreds of supporters who crowded vantage points at Senglea Point and draped orange and red flags over the bastions.


SO since I am from Birzebbuga 'WELL DONE TO BERZY!!' and off course to the winners:) 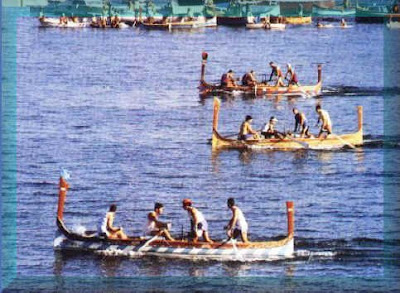 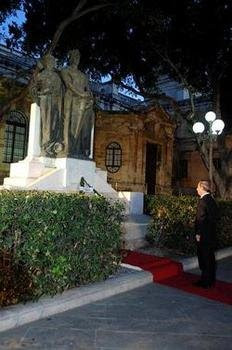 Malta is today celebrating Victory Day, recalling the victories of the Great Siege of 1565 and the Second World War.
There will also be traditional regatta held in Grand Harbour today starting at 2 p.m.

The siege, one of the bloodiest and most fiercely contested in history, was won by the knights and became one of the most celebrated events of the sixteenth century. Voltaire may have exaggerated when he said, "Nothing is more well known than the siege of Malta," but it unquestionably put an end to the European perception of Ottoman invincibility and marked a new phase in Spanish domination of the Mediterranean.[1] Nevertheless, the siege should not be viewed in isolation. Rather, it was the climax of an escalating contest between a Christian alliance and Ottoman empires for control of the Mediterranean, a contest that included a previous attack on Malta in 1551 by the Turkish corsair Turgut Reis and which in 1560 had resulted in the utter destruction of an allied Christian fleet by the Turks at the battle of Djerba.

Photo taken from the times of malta
Posted by Dina at 8:25 AM 4 comments: 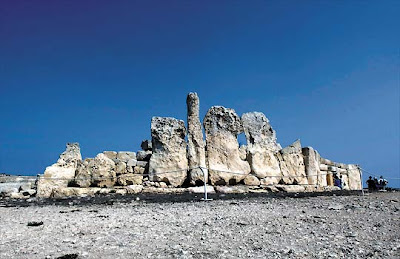 On the 15th of September in Fort St. Angelo Hall Maritime Museum, Vittoriosa there will be held a Heritage Conference. This has attracted recent graduates and postgraduates from Italy, Greece, Turkey, Portugal, Britain and Malta who will be presenting papers and research in a variety of disciplines related to cultural heritage.


(photo and information from www.timesofmalta.com)
Posted by Dina at 7:42 AM 8 comments:

Lighting over the Maltese Islands 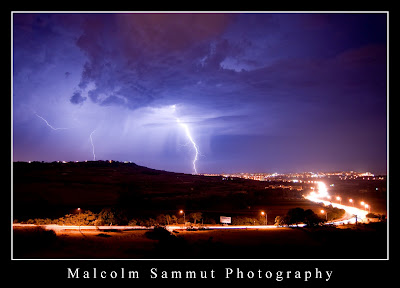 In connection with yesterday's post. Here is the photo I've mentioned you should see from the timesofmalta website. I was lucky enough to be able to contact the author of the photo Malcolm Sammut and he was more than happy to share this photo.
Posted by Dina at 6:37 AM 8 comments: 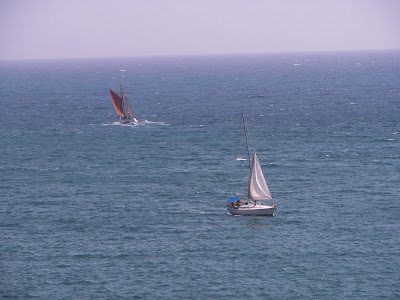 Apparently last night we had the first thunderstorm of the season with some serious lightning and heavy rain across most of the island and yet there I was sleeping!! Photo has nothing to do with the thunderstorm, however if you want to see a great shot of the thunderstorm just visit www.timesofmalta.com today. In addition to that the heat is still here!! I am sure that by now most of you have realised that I am not very compatible with the heat.
Posted by Dina at 9:33 AM 6 comments: 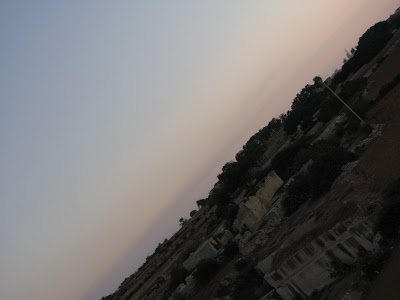 Summer time in Malta means heat and dry land. Here is a photo of one summer's evening after a very hot day over looking the dry fields opposite from where we live. I hope you like this angle, I wanted to try something different.
Posted by Dina at 11:04 AM 5 comments: