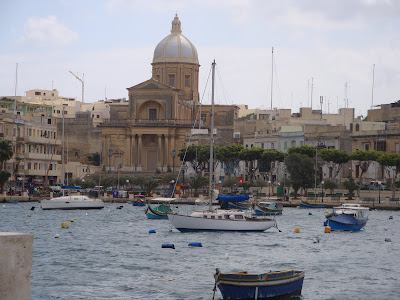 Kalkara is situated at the south of the Maltese island adjacent to the three cities,known as Cottonera and part of the Grand Harbour. Kalkara was named after the 12th Earl of Kalkara and British Secretary of War in 1859.

It is believed that the Kalkara area is one of the oldest inhabited zone, due to the fact that accessible creeks have provided the then Sicilian seamen shelter to settle in Malta.

Old maps and documents always referred to Kalkara, (earlier known as Calcara) a suburb of Vittoriosa city. As a matter of fact the Capucchin Convent and St Liberata Church have always been referred to 'Fuori la Mura' outside the bastions surrounding the city. The findings of Egyptian Columns in the area known as 'Ta Bighi' in 1830 and the building of Is-Salvatur Chapel in 1650 indicates the various interest in Kalkara. Among the historical buildings in Kalkara one can find the Wied Ghammieq Cemetery, purposely built during the Cholera epidemy in 1837, Fort Rinella, Fort Ricasoli and Villa Portelli which served as a private residence for the Flag Officer in Malta during the British rule.
Posted by Dina at 6:43 AM 3 comments: 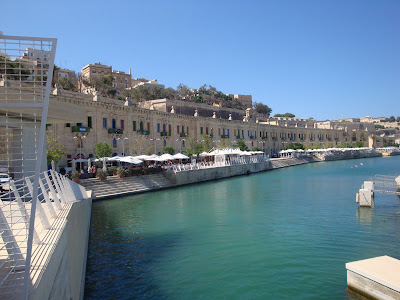 With its strategic location within Malta’s historical Grand Harbour, the Valletta Waterfront has been brought back to life with the award-winning restoration and development works. With its nineteen historical 250-year-old sumptuous warehouses, built by Grand Master Pinto at the height of the baroque period in Malta … stretching along the water’s edge and the historical Quay Wall where the Knights of St John and European merchants used to unload their wares … the impregnable Old Power Station that serves as a testimony to the eclectic and heroic history of the Grand Harbour … the Forni Stores, dating back to 1626 and constructed by Grand Master de Vilhena.
Posted by Dina at 6:19 AM 6 comments: