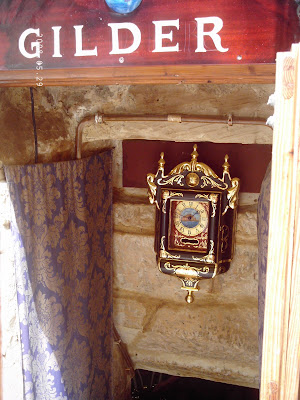 On one of my recent trips to Valletta, hidden away in a cellar I discovered one of the gilders found on the Maltese islands. ( A gilder is a craftsman who works with gold and silver to artistically cover an object as in the gold leaf process).

It is difficult to trace the origin of the The Maltese Clock, however, tradition has it that they adorned houses of the Maltese nobility as far back as the 17th century.

The clock was made of wood suitable to take on several layers of gypsum, which was then engraved and decorated with gold. The case had two doors. The inside door incorporated the hand painted dial to which a hand made clock mechanism by Maltese Clock Master Makers was fixed from behind. Further down in the clock face the moving pendulum could be seen through a decorated aperture. On the front there was another door, which was framed with glass to protect the dial and ornate hands. The clock case was then painted and abundantly decorated with flowers typical of the colourful finish for which the clock is renowned.

These clocks were made either as wall hanging or table clocks. The former were, however, the most popular. Today, the Original Maltese clocks are collectors items and very hard to find for acquisition as they fetch very high prices running into thousands of Liri.

However, the tradition goes on with the reproduction of these clocks. They are made in the same original manner using the same technique. The only difference is that one cannot find the original hand-made clockwork. Two types of movements are used nowadays: a mechanical movement, which is adapted to be wound from the inside of the clock or a quartz battery movement. The latter is more commonly used being more practical.

The Maltese Clock reproductions come in different colours, the most popular being green, black and terracotta (maroon colour). Our clocks are decorated in 22-carat gold leaf. They carry the Clock Studio’s certificate of authenticity. Every clock is carefully made after a long process. Mass production is not possible!
Posted by Dina at 10:00 AM 3 comments:

Valletta Bastions and Harbour no 2 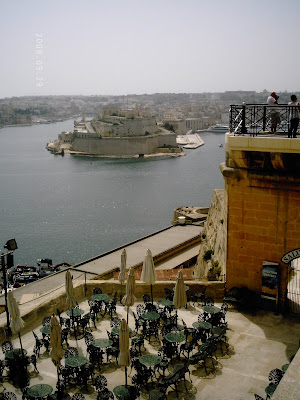 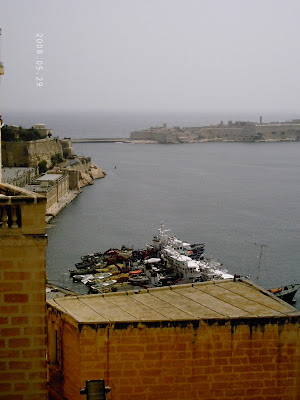 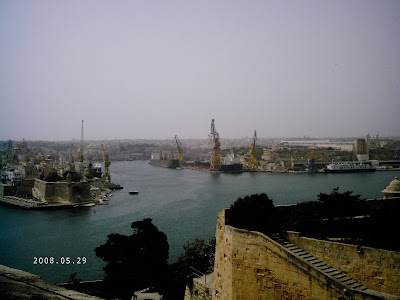 Some more images taken from the lower barraka gardens in Valletta. 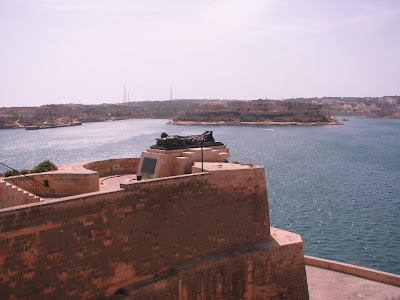 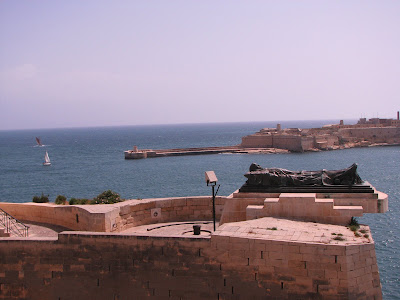 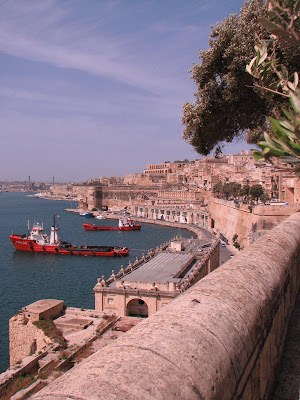 This bell is located on the Bastion adjacent to the lower 'Barrakka' Gardens. The memorial commemorates some 7000 servicemen, merchant seamen and civilians who died in Defence of the islands during World War II. 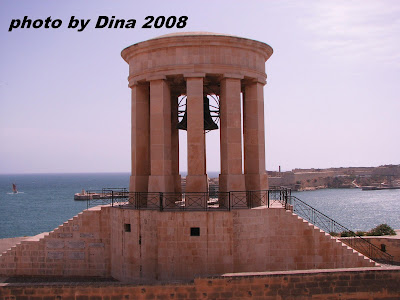 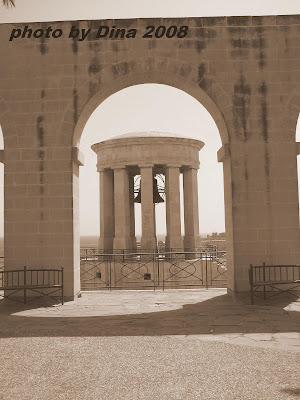 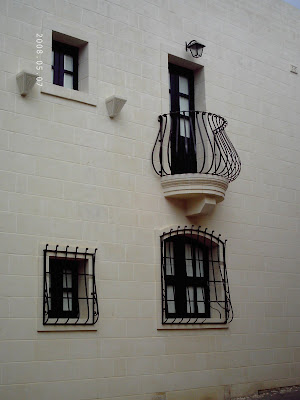 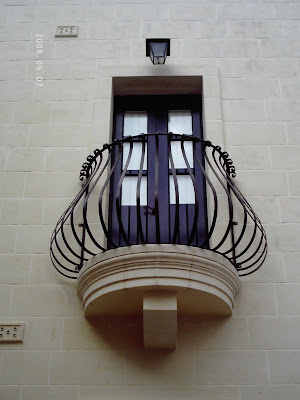 In Malta you will find different styles of houses. There are the old houses of character which are usually found in the core's villages and are now a days being restored to lovely houses, then there are apartments and maisonettes which obviously start from small to very big, there are the terraced houses which are more modern and big, there are the villas and also something I wish to own one day there are the farmhouses, these are usually found on the outskirts of the villages. The photos I posted today are of an old house of character which has been restored.
Posted by Dina at 6:51 AM 4 comments:

Blog of the month for April !!!

I just found out that somebody voted for the blog post "Għar Lapsi ..... a diving experience ... ".

The reaction of the reader:
"Dina shows beautiful photos of our lovely sunny island and promotes a really good insight of our maltese traditions and everyday life in Malta." 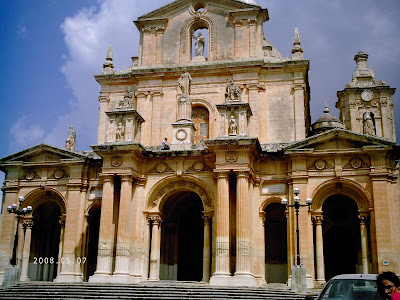 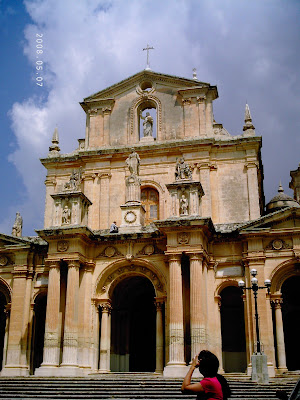 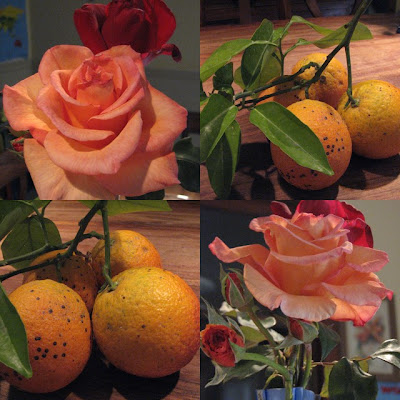 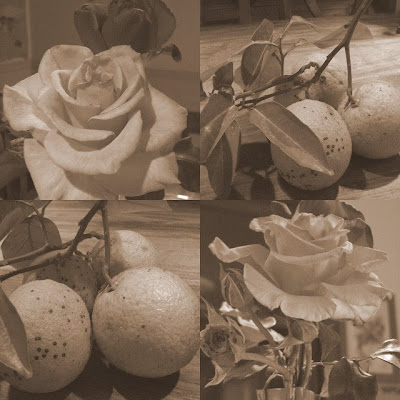 Roses blooming side by side to Maltese oranges,
bright peach red and orange,
behind the rubble wall,
colours that reminds me of fall,
which is now gone
and reminds me of dawn............. thank you.....

Mothers cannot do it all
But surely do they try.

Mothers hear the angel's call,
To comfort all who cry.

Mothers for themselves may fall,
For others they will fly.

Mother's bear the weight of all,
For their children, they would die.

A Mother's gift extends beyond
All bounds of time and space.

Her lovingness and nurturing
Make Earth a peaceful place. 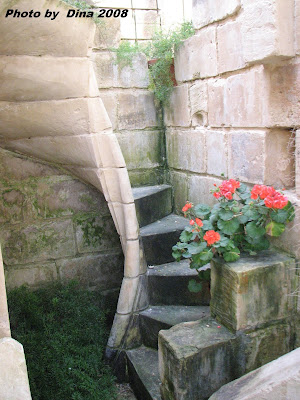 Spiral Staircase made from stone which in Maltese is known as 'il-garigor' and are usually found in the older houses. They are however a trend amongst some and are being rebuild in modern houses.
Posted by Dina at 8:56 AM 7 comments: 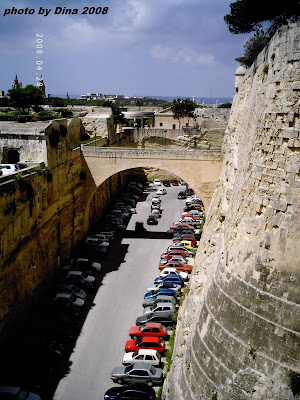 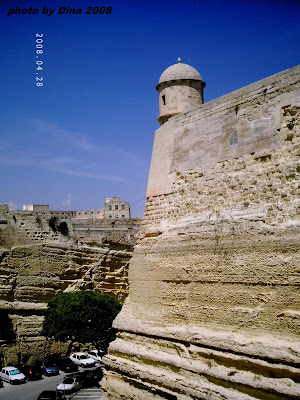 Here's a photo taken last week. These are part of the Valletta bastions and tomorrow I will post a photo so you can see how impressive the size of these bastions are.
Posted by Dina at 3:32 PM 3 comments: 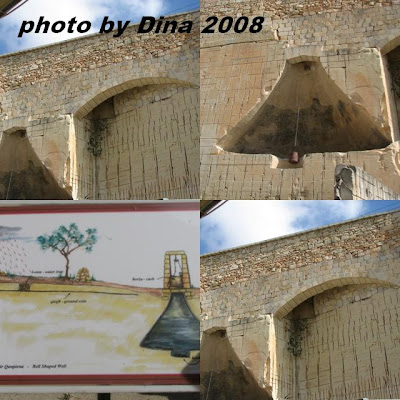 The bell shaped well. This is how the wells in the early ages used to be built. These photos were taken from my visit at the Maltalimestone heritage. For all of you who live in Malta, this is a place to visit, and for all of you who will come to Malta make sure you save a morning for this place. It is very interesting especially if you have children that are still in primary school.
Posted by Dina at 8:00 AM 3 comments: 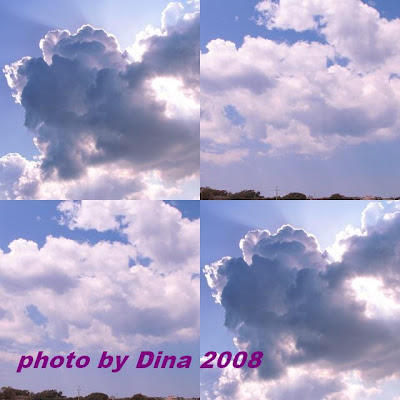 For Friday skywatch here's some photos I've taken of our Sky whilst sitting on the beach playing sandcastles with my daughter. Visit Wiggers world for more friday sky watchers.

Also visit maltamedia as my blog has been featured here!
Posted by Dina at 7:06 AM 17 comments: 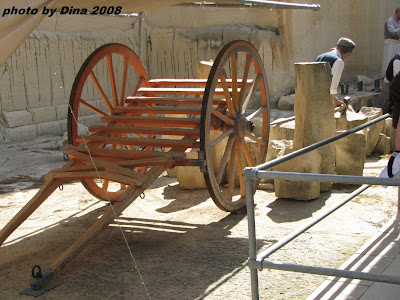 In the early years the Maltese builders used to transport the hand cut pieces of stone with this cart and it was called ''il-vjagg'' which literally means a trip.


Malta Limestone Heritage is situated in the old village of Siggiewi. It is a family run enterprise and was opened in May 2002. For further information with regards to the complex you can visit their website
Malta-limestone heritage
Posted by Dina at 8:53 AM 4 comments: