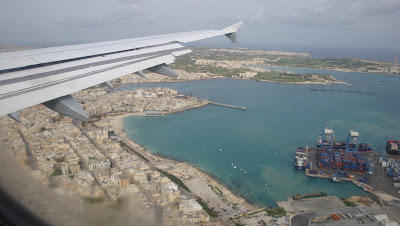 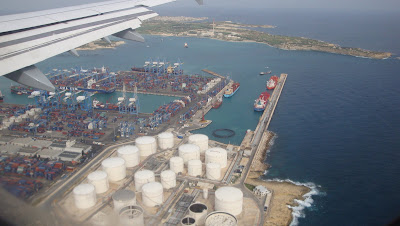 and it's slow destruction............... Once Pretty Bay lived up to it's name.
It leaves much to be desired now with the Malta Freeport dominating the landscape!!
Posted by Dina at 5:13 PM 4 comments: 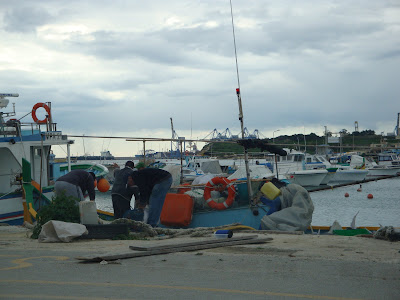 Last week I went to meet some of my mummy friends for lunch. We met in Marsaxlokk and was delighted to see these hard-pressed fishermen putting things together for their next fishing trip.
Posted by Dina at 11:44 AM 4 comments: 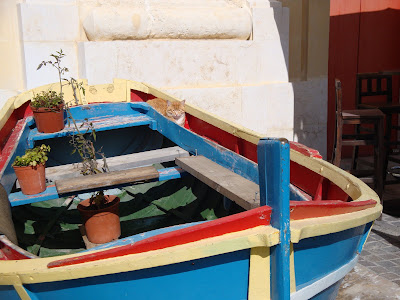 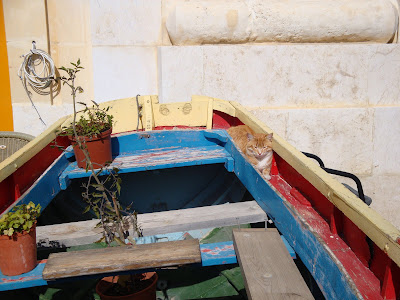 Now wouldn't you want to be sitting in the sun in such a perfect spot? Photo was taken last week and location is the Valletta waterfront, however the idea to take the photo was of my friend Laetitia.
Posted by Dina at 8:52 AM 4 comments: 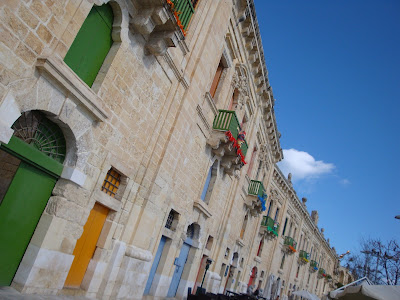 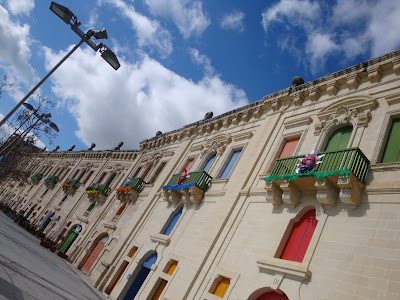 I have recently discovered this blog http://www.skyepuppy.blogspot.com and have been trying out some of the lessons. Since the other day I was down with my friend Laetitia at the Valletta waterfront, where we also took the photos I have posted yesterday, I also had the opportunity to take some shots showing straight lines however using different angles.
Posted by Dina at 11:52 AM 6 comments: 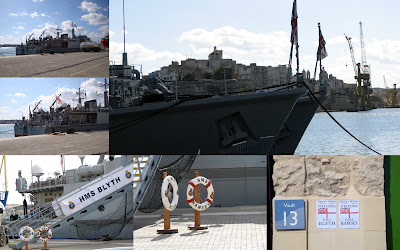 HMS Blyth, built by Vosper Thorneycroft (UK) Ltd, was launched by Lady Charlotte Garnett on 4th July 2000. After her final period of fitting out she was formally accepted into the Royal Navy on 28th February 2001. Sea trails were conducted to ensure the ship was capable of operations in the most testing of conditions and then a period of Operational Sea Training provided the ship's company with the training they needed to ensure Blyth can achieve everything expected of her.

HMS Blyth completed her first operational deployment on the 22 May 2003. The deployment began 10 September 2002 and saw the ship deploy through the Mediterranean on NATO Exercises, then through Suez into the Gulf to support Operation Telic. HMS Blyth found and destroyed 5 mines as part of this Operation.

Previous Blyths
The ship is the second to bear the name Blyth, the first being a Bangor class minesweeper launched 2 Sept 1940. She suffered from excessive vibration and was not completed until Jun 1941 when she joined the 13th Mine Sweeping Flotilla (MSF) under the Plymouth Command. In December 1942, she was transferred to the 9th MSF as part of the Portsmouth Command. Due to her continuing problems with excessive vibration she was declared unsuitable for mine sweeping duties and as a result assumed an air-sea rescue role.

Notwithstanding her mechanical problems she was involved in a series of live operations earning her battle honours. She was placed in reserve in 1946 and sold in 1948 and renamed Radbourne. After a short career as a ferry she was broken up in November 1952.

HMS Ramsey is the tenth of the Sandown Class of Single Role Minehunters to enter service and the third Royal Navy ship to bear the name. Constructed by a sophisticated modular process, Ramsey was built from glass-reinforced plastic by Vosper Thorneycroft (UK) Ltd at their Southampton yard.

The ship was launched by Lady Alynne Dunt on 25 November 1999 and was accepted by the Royal Navy on 26 July 2000. HMS Ramsey has a ship's company of 5 Officers, 7 Senior Ratings and 22 Junior Ratings. HMS Ramsey is affiliated to the town of Ramsey on the Isle of Man; The Isle of Man Steam Packet Company; the Ramsey Charitable Trust; the Manx Sailing and Cruising Club, Ramsey Grammar School, the Ramsey Branch of the Royal National Lifeboat Institution and the Sea Cadet Unit TS Whitehaven. In addition to the official affiliations that HMS Ramsey has on the Isle of Man she also has a strong link with Ramsey's Royal Naval Association

Forgot to say that both ships are berthed in Valletta at the moment and my friend and I went there this morning to take some shots.
Posted by Dina at 12:51 PM 3 comments: 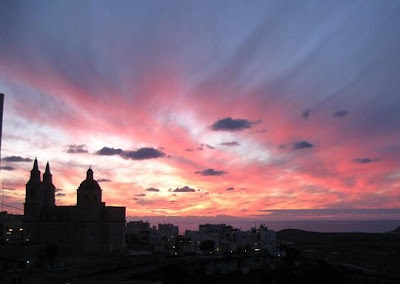 Yesterday on one of our local newspapers (online) I found this beautiful photo of a Sunset taken by Mr. Fsadni. The photo was taken from Mellieha. Well done Mr Fsadni, this is an amazing shot!!
Posted by Dina at 9:52 AM 5 comments:

600th post Wishing you all a happy Valentine's day

On Valentine's day we think about the people who are dear,
how much they add to life's delight whenever they are near.....

Valentine treasures are people who
have often crossed your mind,
family, friends and others, too,
who in your life have shined
the warmth of love or a spark of light
that makes you remember them;
no matter how long since you’ve actually met,
each one is a luminous gem
who gleams and glows in your memory,
bringing special pleasures,
and that’s why this Valentine comes to you:
You’re one of those sparkling treasures!
Posted by Dina at 7:04 AM 6 comments: 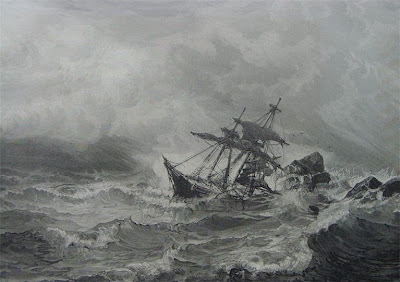 In the year 60 AD an event took place that is comprehensively described in the Bible: the shipwreck of the apostle Paul (Acts of the Apostles 27 and 28) . According to the legend this shipwreck took place at St. Paul's Bay. Saint Paul stayed in Malta for three months and performed a number of miracles, like the healing of the father of Publius, the Roman governor. Publius became the first bishop of Malta. Tradition has it, that St. Paul converted the Maltese to christianity, but there is no historical evidence to prove it. The first signs of the existence of a christian community in Malta date back to not earlier than the fourth century. Nevertheless Saint Paul is regarded as the one who brought christianity to Malta; Saint Paul is the patron saint of Malta and the cathedral of Mdina is dedicated to him.

The shipwreck of St. Paul in 60 AD is recorded in some detail in the Acts of the Apostles, and a Pauline tradition of long standing supported by archeological excavations carried out at San Pawl Milqghi prove beyond doubt that his arrival in Malta is a historical fact and it is also a fact that during his three-month stay on the Island he sowed the first seeds of the Christian Religion to which Maltese people overwhelmingly belong, but inevitably, a number of legends have grown up over the centuries, some verging on the impossible, but others not without a grain of truth.

The Apostle Paul was, at this time, being conducted to Rome under arrest to be judged before Caesar as was his right as a Roman Citizen. Amongst the other prisoners was the physician St. Luke who recorded the account of that eventful journey.

The nearest habitation to the place of shipwreck was the villa of Publius, the Chief Man of the Island. All those who had been shipwrecked spent three days there and after they had regained their strength they moved on to Melita the chief town of rile island. In the city Paul cured Publius' father of a fever after which the Chief Man of the Island was converted to Christianity and later ordained Bishop by St. Paul. St. Publius was the first bishop of Malta. After three months, by which time, the sea was again reckoned to be safe for navigation, and loaded with gifts from his Maltese friends, Saint Paul sailed away to Rome and to his subsequent martyrdom. When the Roman Emperor Constantine embraced Christianity and made it the official religion of the Empire it may be assumed that Christian worship was better organized and that a number of places of assembly were built in various places in the islands. Tradition has it that one such church was built on the site of the palace of Publius, where St. Paul had cured the father of the Chief Man of the Island. Many times rebuilt, the site is now occupied by the Cathedral Church dedicated to Saint Paul at Mdina.
Posted by Dina at 8:19 AM 6 comments: 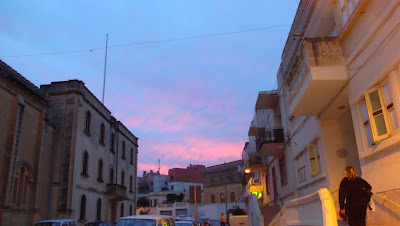 As a person I love sunrise more than sunset, however there are times when I think sunsets are magical. The setting wasn't ideal but hey you can't postpone such a shot !! I hope you all like it. Good Sunday to you all.
Posted by Dina at 8:13 AM 3 comments: 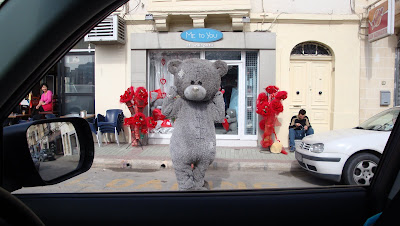 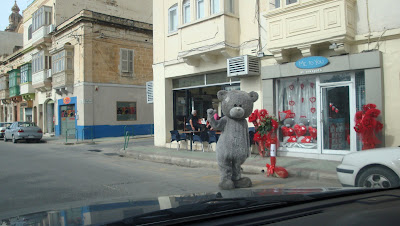 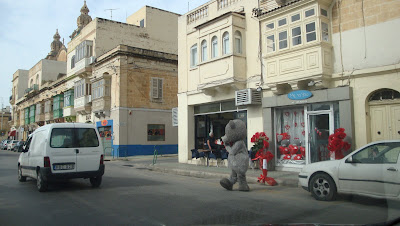 Love is in the air ........... After our morning ritual my friend Laetitia and I needed to go to Msida a town 20 minutes drive away from Birzebbuga. Little did we know that we were about to come across this cute 'little big bear'!! We even told him that he looked cute!!
Posted by Dina at 1:09 PM 4 comments: