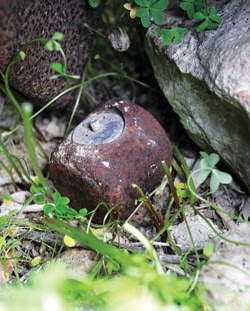 An eleven year old recently found this bomb (butterfly bomb) in one of Malta's valleys. The story interested me and I thought it would be appealing to do a post about Malta and world war 2. This bomb (pictured above) was one of the first cluster bombs to be used, earned its name because of the way it resembled a butterfly when its outer shell opened when released from a plane. This caused the bomb to spin, loosening a bolt and releasing a firing pin that armed the explosive.

Some information I found about Malta during WW II.

During World War II, Malta became the most bombed place on earth – 6,700 tons of bombs fell in just six weeks.

At the outbreak of World War II, Malta was Britain’s most important Mediterranean naval base. As such, it was to protect east-west supply lines while blocking the passage between Italy and North Africa. When Mussolini plunged Italy into the war on June 10, 1940, Malta knew for sure that it was destined to play a frontline role. Europe was nine months into the conflict when, on June 11, Malta suffered its first air attack on the dockyards.

At that point, Malta’s entire anti-aircraft resources totaled forty-two guns, two dozen searchlights and three Gloster Gladiator biplanes which had been discovered in crates and hurriedly assembled. The Gladiators, christened Faith, Hope and Charity, were matched against two hundred Italian aircraft based 60 miles (100km) north in Sicily. On the face of it there was surely no contest, but by forcing the enemy aircraft to bomb from a greater height, the three small Glosters more than earned their keep. The Maltese people no longer felt like a sitting target, and for three long weeks the Gladiators defended Malta’s airspace alone
In December 1940, the German air force moved into Sicily to support the Italians and with two hundred and fifty aircraft the combined Axis forces greatly outnumbered Malta’s aerial strike force. Meanwhile, German and Italian submarines maintained a relentless assault on the supply convoys.

Malta’s worst period of the war was in early 1942, when the air raids never ceased. In April alone, 6700 tons of bombs rained down on the island and on the 15th of that month a special message from the British kind, George VI, informed the people of Malta that they had collectively been awarded the George Cross for their unyielding bravery “…to bear witness to a heroism and devotion that will long be famous in history.”

The Maltese minimized loss of life during the war by constructing air-raid shelters and relocating large numbers of the population from Valletta and Grand Harbour are to safer parts of the island. The old railway tunnel between Valletta and Floriana provided a sanctuary for many during the bombing raids and, as in medieval times, people sought shelter in Mdina. Some 35,000 buildings throughout the islands suffered damage or were destroyed during the war, 11,000 of them in April 1942, the worst month of bombing.
Ultimate control of the central Mediterranean hinged on supply lines and in the early months of 1942 the Allies suffered heavy shipping loses in the Malta-bound convoys. For much of the year the country’s civil and military population was reduced to near starvation levels, relying on communal feeding service and being forced to eat their diminishing animal stocks.

In the summer of 1942, Malta was in dire need of food and fuel to continue its struggle against the Axis powers. As the Maltese prayed to Santa Maria, who fest day was due on August 15, Britain sent a convoy of 14 merchant ships under armed escort. As the ships neared Malta they came under massive air and sea attack. Nine merchantmen were sunk, the five remaining included the tanker Ohio, with 11,000 ton of fuel critical to Malta’s survival. On August 13, four vessels limped into Grand Harbour. More prayers were offered to Santa Maria and on the morning of the 15th the Ohio reached Malta.

It took the Allied assault on Sicily in 1943 to effectively end Malta’s close involvement in the war. The island acted as a fighter base during the operation to capture Sicily’s airfields and once this had been achieved the Axis powers were unable to continue their harassment of shipping in the central Mediterranean. For Malta, three years of war had been intense. The islands had endured some of the most ruthless bombing of World War II and it was primarily because the buildings were of stone that huge sections of the towns were not destroyed in the air raids. Nearly 1500 Maltese civilians were killed in the air raids.
The clearing up operations lasted for years. Valletta’s bombed seaboard was still in rubble into the 1950’s and the rebuilding of town around Grand Harbour, now collectively known as the Three Cities, took nearly a decade.

Today there are many reminders of World War II in Malta. Among them, one can visit the Lascaris War Rooms in Valletta where the military operations were carried out. An animated commentary vividly evokes Operation Husky (the invasion of Sicily) and other pivotal events planned in these subterranean passages.

The National War Museum in Valletta is a small museum full of World War II items. There are black-painted Italian torpedo boats, “Faith” (the only surviving biplane of the trio that defended Malta, and the George Cross awarded to the Maltese people.

The three most bombed cities in Malta in World War II were Cospicua, Vittoriosa and Senglea. The Malta at War Museum in Vittoriosa shows a great deal of what happened at that time. Under a deluge of bombs dropped on the Three Cities, the residents cowered, sometimes for weeks on end, in a claustrophobic warren of underground tunnels and honeycombed rooms in the bedrock underneath the landward fortifications of Vittoriosa. Today these underground shelters have been furnished with period props and original artifacts-communal dormitories, private cubicles, birth room , warden’s office and an entire exhibition offering a fascinating and grim insight into wartime life in Malta. The museum screens a documentary about the Maltese resistance made in 1942 with the aim of bolstering the nation’s morale at the height of the German campaign to bomb Malta into surrender.
Posted by Dina at 6:26 AM 11 comments: 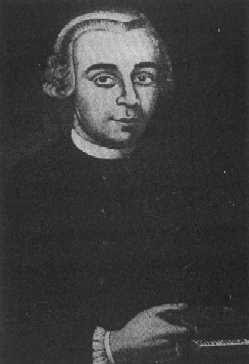 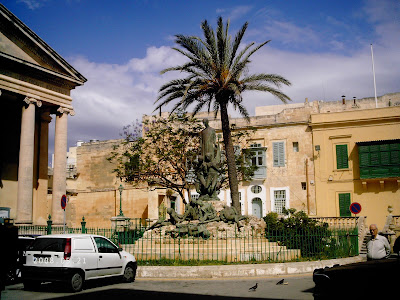 Dun Mikiel Xerri (Żebbuġ, 29 September 1737 - 17 January 1799) was a Maltese patriot. Xerri studied at different universities in Europe. He was a Maltese patriot who lived under both the Knights of St. John during their time in Malta and the French when they took over the Maltese Islands. He was involved in an unsuccessful revolt to overthrow French rule under Napoleon Bonaparte for which he, together with other locals, was executed on 17 January 1799 at the age of 61.
Posted by Dina at 6:07 AM No comments: 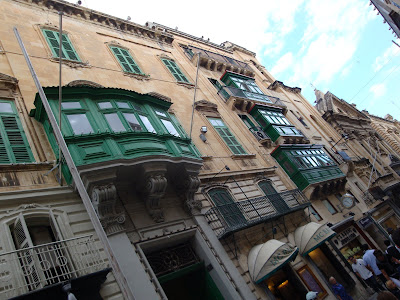 The balconies are amongst the first characteristics of Malta you notice. The elegant wooden balconies of Valletta (the capital city of Malta) were used as a view point for families to catch up on the business of the street below. Today in Valletta you will see baskets lowered from balconies for the baker to pop in a loaf of bread. The finest and longest balcony is that of the Grand Master’s palace in Valletta. It stretches around corners and along the side street walls.
Posted by Dina at 5:58 AM 3 comments: 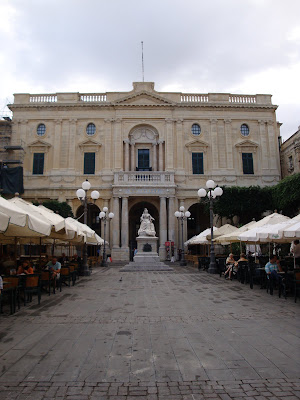 I have already posted a photo of this particular location, the post's title was Queen Victoria. The reason I am doing a re-post is because the Bibliotecha's facade has been cleaned and it looks beautiful! Obviously one can enjoy this lovely square whilst sitting here at cafe cordina drinking a nice cup of coffee and eating a cheesecake.
Posted by Dina at 6:28 AM 6 comments: 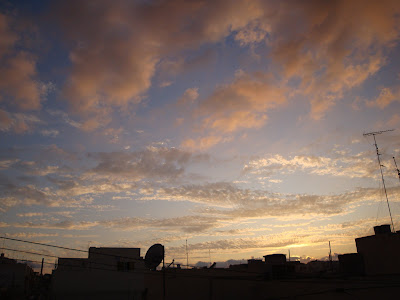 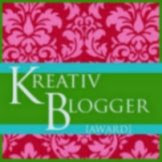 I was honoured with a blog award from Isabel! Thanks dear. Very much appreciated!
Posted by Dina at 6:23 AM No comments: