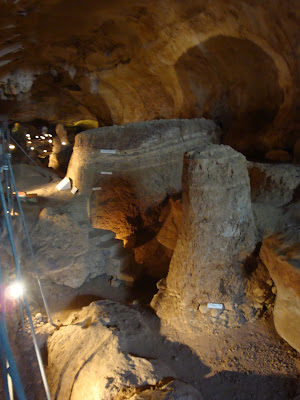 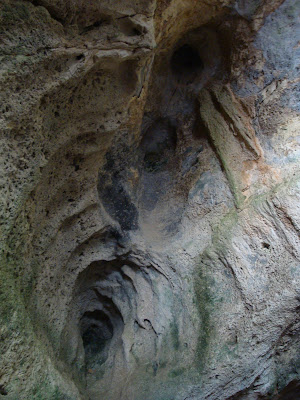 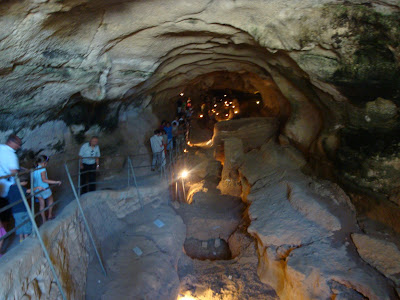 Formation.
The Ice Age had a great impact on Malta not only in shaping its topography but also on its flora and fauna. The climate in those days was milder and much wetter, almost tropical. The vast amount of water from heavy rainfalls was responsible for carving up the landscape and forming the valleys, as we know them today. Underground caverns and caves were also hollowed out. One such cave is that of Ghar Dalam, perched on a low cliff-face at the mouth of Wied Dalam at Birzebbuga on the south of Malta. It is good example of the KARST phenomenon erosive process within the Lower Coralline Limestone layer. Today Għar Dalam is considered to be one of the oldest caves in Maltese Islands. Evidence of its remote antiquity are the huge stalagmites and stalactites located in the first quarter of the cave. This cave was formed by the action of rushing waters that eroded the soft limestone forming a long phreatic tube. An overlaying river running down towards the sea gradually ate its way into, through, and well beyond the subterranean tunnel, reaching ultimately the level of the present valley bed. The two ends of the tunnel were thus left perched high on either side of the valley. One end is now Għar Dalam, whilst the opposite end is known simply as 'the Second Cave'.

Cave deposits.
The overflowing river, running at right angles to the tunnel, gradually “ate” its way deeper and deeper into the limestone until it reached the tunnel's roof and breached it. This formation of the cave happened in the early periods of the Pleistocene, but the collapse of the cave’s roof happened at much the same time when herds of hippopotami and elephants roamed the southern European shores. The opening of the tunnel roof acted as a swallow-hole. In this way soil, pebbles, stones, carcasses of dead animals, dismembered skeletal parts and other debris dragged by the river were sucked into the tunnel and deposited within. The pile of soil and bones gradually spread laterally but never reached either end of the tunnel. This explains why most of the organic remains (bones) are limited to the outermost 75 meters.

The lowermost layer inside the cave is made up of dissolved clay and is devoid of any animal remains, but in the second lowermost layer known as the “Hippopotamus layer", thousands of molars (teeth) and other skeletal parts had been discovered. Two species of hippopotamus have been identified as well as two species of elephants, and a variety of micro-mammals including dormice and bats. What made all these animals special was the fact that while some become stunted in stature, others turned into giants.
Posted by Dina at 6:10 PM 8 comments: