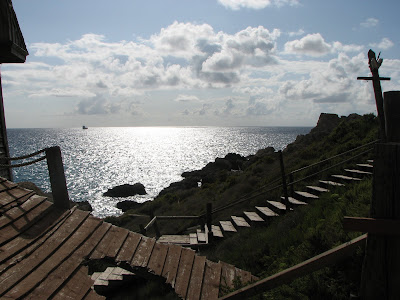 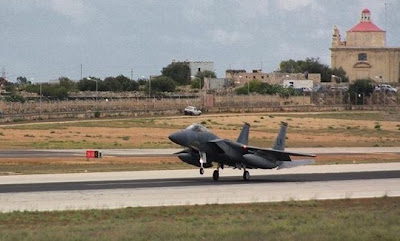 Taking part in this year's 17th edition of the Malta International Airshow, which will be held tomorrow and on Sunday are aircrafts from seven countries, with aircraft ranging from F-16 and Tornado fighters to the Harrier jump jet, a water bomber, and the SH60 helicopter used by the commander of the US Sixth Fleet.

Photo and information taken from www.timesofmalta.com
Posted by Dina at 6:50 AM 3 comments: 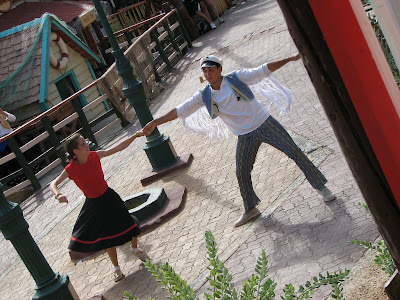 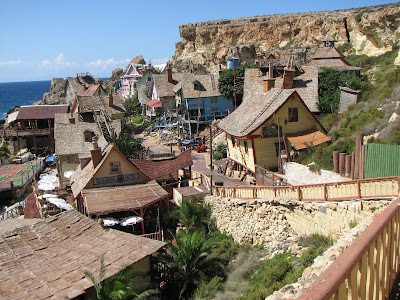 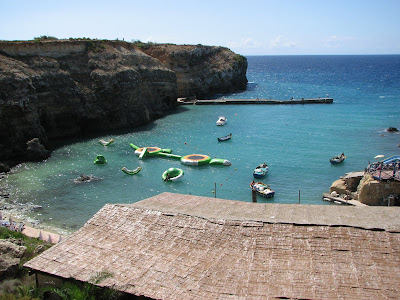 Sweet haven village has been set in the 1980 for the film 'Popeye' starring Robin Williams as Popeye the sailor man. The fun park has a number of activities for children and also for all those young at heart. It is open all year round and it is worth taking the kids and spending a day there.
Posted by Dina at 6:24 AM 3 comments: 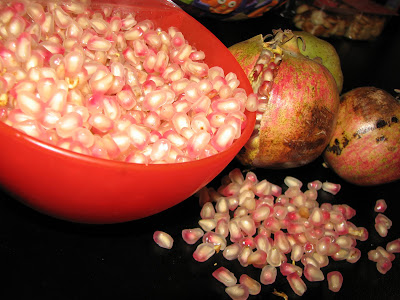 The pomegranate 'ir-Rummiena' is native to the region of Persia and has been cultivated in Iran, Armenia, Azerbaijan, Georgia, and the Mediterranean region for several millennia.

A widespread root for "pomegranate" comes from the Ancient Egyptian rmn, from which derive the Hebrew rimmôn, and Arabic rummân. This root was given by Arabs to other languages, including Portuguese (romã), Kabyle rrumman and Maltese "rummien". The pomegranate ('rimmôn') is mentioned in the Bible as one of the seven fruits/plants that Israel was blessed with, and in Hebrew, 'rimmôn' is also the name of the weapon now called the grenade. According to Webster's New Spanish-English Dictionary, "granada," the Spanish word for "pomegranate," could also mean "grenade.

After opening the pomegranate by scoring it with a knife and breaking it open, the arils (seed casings) are separated from the peel and internal white pulp membranes. Separating the red arils is simplified by performing this task in a bowl of water, wherein arils sink and pulp floats. It is also possible to freeze the whole fruit in the freezer, making the red arils easy to separate from the white pulp membranes. The entire seed is consumed raw, though the watery, tasty aril is the desired part. The taste differs depending on subspecies of pomegranate and its ripeness. The pomegranate juice can be very sweet or sour, but most fruits are moderate in taste, with sour notes from the acidic tannins contained in the aril juice.

Wild pomegranate seeds are sometimes used as a spice known as anardana (which literally means pomegranate (anar) seeds (dana) in Persian), most notably in Indian and Pakistani cuisine but also as a replacement for pomegranate syrup in Middle Eastern cuisine. As a result of this, the dried whole seeds can often be obtained in ethnic Indian Sub-continent markets. The seeds are separated from the flesh, dried for 10–15 days and used as an acidic agent for chutney and curry production. Seeds may also be ground in order to avoid becoming stuck in teeth when eating dishes containing them. Seeds of the wild pomegranate daru from the Himalayas are regarded as quality sources for this spice.
Posted by Dina at 7:03 AM 4 comments:


Mgarr ix-Xini Watch Tower in Gozo has been opened this July for viewing after extensive restoration.

The tower, built in 1661 at the entrance of Mgarr ix-Xini Bay, was restored by the Wirt Ghawdex society supported by the Ministry for Gozo.


Both photo and information was taken from one of our local online newspapers.
Posted by Dina at 7:07 AM 4 comments: 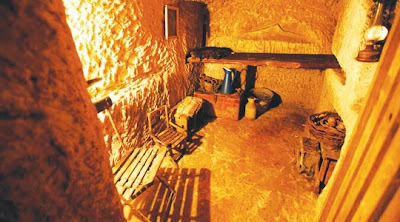 Adolf Hitler's regime had ignored Britain's ultimatum to withdraw Germany's attack on Poland by 11 a.m. on September 3, 1939 and World War II broke out.

Bombs were a common occurrence during the war as Malta became the world's most bombed country, historian Joseph Pirotta said.

Although civilians did not feel as threatened when the British first declared war in 1939, on an official level the fear was real as Italy's involvement was inevitable, Prof. Pirotta said.

Malta was one of Britain's most important naval bases and, when Mussolini declared war in June 1940, it was clear the island would become a main target. Prof. Pirotta added that Malta was completely unprepared for war as the British did not take precautions.

BOTH PICTURE AND INFORMATION EXTRACTED FROM OUR LOCAL ONLINE NEWSPAPER.
Posted by Dina at 3:50 PM 4 comments: