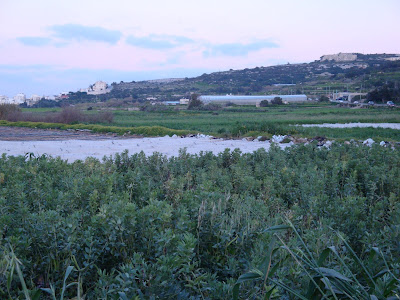 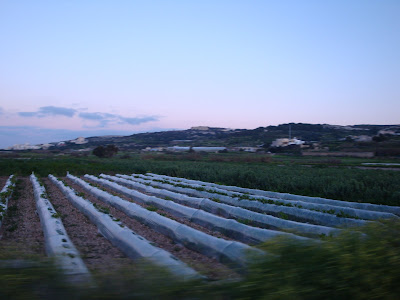 Here are some more shots of Xemxija Valley.
Posted by Dina at 7:13 AM 2 comments: 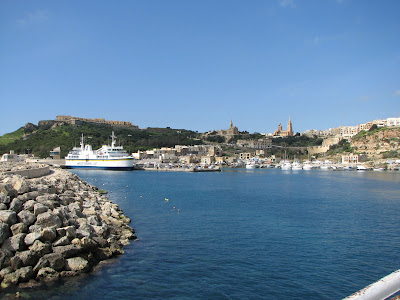 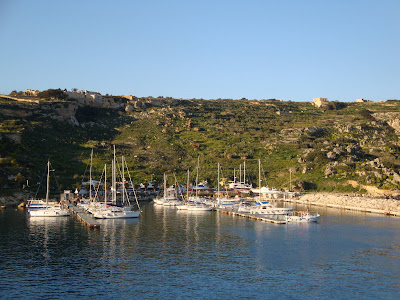 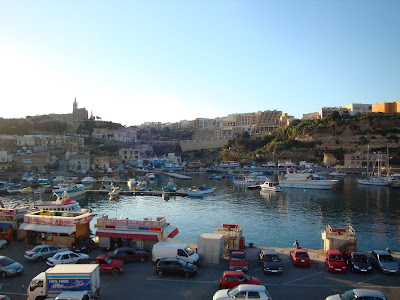 Gozo Channel provides a roro (roll on roll of ) service between mailand Malta and Gozo all year round. The service provided is for vehicles and passengers and is from the Cirkewwa Harbour in Malta to the Mgarr Harbour in Gozo. The pictures here show the Mgarr Harbour of Gozo.
Posted by Dina at 8:59 AM 7 comments: 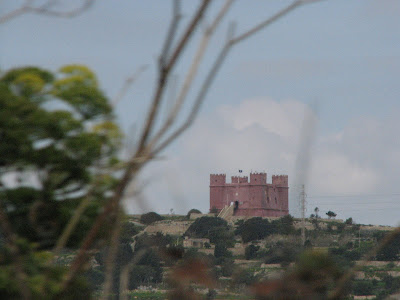 St. Agatha's Tower in Malta is similar in style to the Wignacourt towers, though it was completed in 1649 during the Grand Mastership of Juan de Lascaris-Castellar to a design by Antonio Garsin. It is also known as the Red Tower due to the colour it is painted.


St. Agatha's Tower is commonly referred to as the Red Tower. The original structure is a square tower with four square corner towers with cannon ports in the towers giving interlocking fields of fire commanding the base of the walls and the gateway, with large cannon ports in the faces of the main tower. The outer walls are approximately four meters thick at the base and the interior of the tower is enclosed by a barrel vaulted roof. The corner towers are surmounted by very characteristic fish tail crenelations.

The Tower is situated in a commanding position on the crest of Marfa Ridge at the north west end of Malta, overlooking the natural harbour and obvious landing site of Mellieħa Bay with clear views over to Comino and Gozo, and also eastward to the line of watchtowers along the north shore of Malta that linked it with the Knights headquarters in Valletta. It was the Knights' primary stronghold in the west of Malta, and was manned by a garrison of 30 men, with ammunition and supplies to withstand a siege of 40 days.

Like many of the Knights' early defensive structures, during the 18th century it was strengthened by the addition of a much lower profile battery around its flanks. It continued to have a military function throughout the British period, and was manned during both World Wars. From the British period it continued its military function being used as a radar station by the Armed Forces of Malta.

By the close of the 20th century the tower was in poor repair with one turret completely missing and another turret severely damaged. The Tower was the substantially restored by Din l-Art Helwa starting in 1999, with restoration being completed in 2001, assisted by substantial industrial sponsorship. As part of the restoration work the damaged towers were replaced, the walls and were roof rebuilt and eroded stone facing replaced, the interior walls scraped and painted, the original floor uncovered, and the interior staircase to the roof rebuilt. Due to the extreme unevenness of the floor, this was recently covered by a wooden surface with glass apertures through which one can view the original slabs. The Tower is now in the care of Din l-Art Helwa and is open to the public.

Photo taken by my husband whilst I was driving towards the Gozo Ferry.
Posted by Dina at 6:44 AM 7 comments: 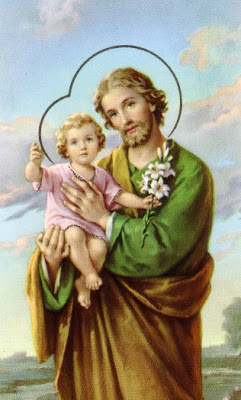 The feast of St.Joseph the worker is celebrated throughout the Catholic world. In Malta the day's celebrations are most vibrant in the town of Rabat. This date was already dedicated to Saint Joseph in several western calendarts in the tenth century. It was accepted in Rome in 1479, and in 1621 it was inserted into the General Roman Calendar for celebration throughout the Latin Rite. Since it always falls within lent Episcopal Conferences may, if they wish transfer it to a date outside lent. The Eastern Orthodox Church celebrates Saint Joseph on the sunday after Christmas.
Posted by Dina at 6:54 AM 6 comments: 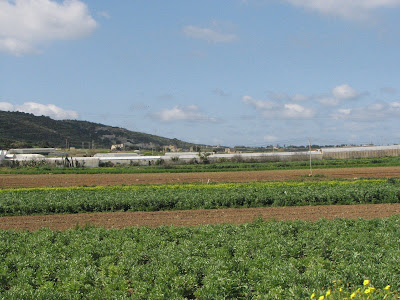 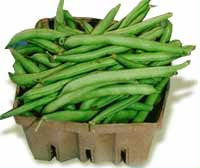 In continuation with yesterday's photo here is a photo (still have more to post) of the Xemxija Valley area. This particular field had 'Ful' green broad beans.

Broad beans have a long tradition of cultivation in old world agriculture, being among the most ancient plants in cultivation and also among the easiest to grow.

Broad beans are rich in L-dopa, a substance used medically in the treatment of Parkinson' disease. L-dopa is also a nutrient agent which might help in controlling hypertension. Some also use fava beans as a natural alternative to drugs like Viagra, citing a link between L-dopa production and the human libido. It is also said that in parts of the world the elders generally restrict the young children from eating them raw (when unmatured) because they can cause constipation and jaundice like symptoms.

For more interesting information about these beans just google green broad beans and check them out on wikipedia etc...
Posted by Dina at 6:36 AM 2 comments: 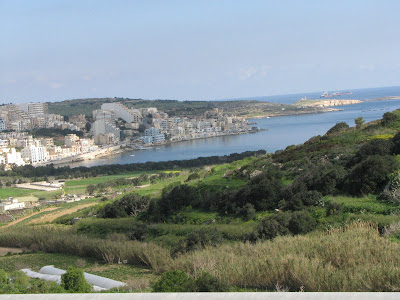 Xemxija is a seaside village and is on the northern part of the island just outside St. Paul's bay and also a short distance from the holiday town of Bugibba. Xemxija is also 10 minutes drive away from some of the best beaches on the island. On the west side of this village lies some of the most fertile valleys in Malta, providing a beautiful sight during spring. Photos of these will follow on my next posts so stay tuned :)
Posted by Dina at 6:51 AM 2 comments: 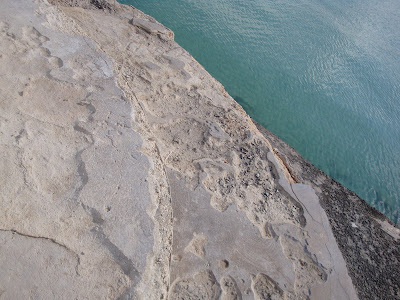 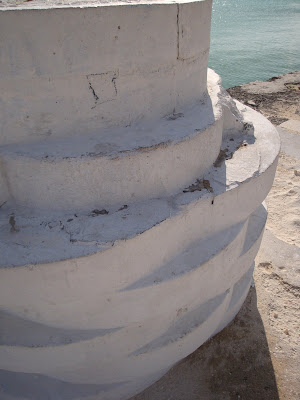 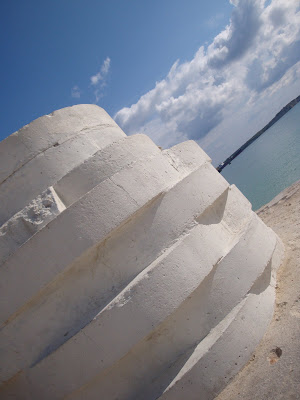 Series of circular objects around my town....... 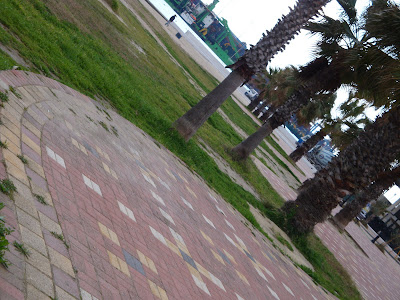 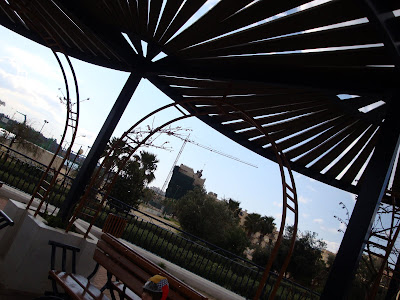 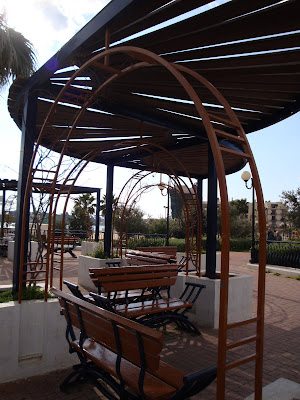 As I have mentioned in one of my earlier posts, I have been browsing through some of the lessons on photography from http://www.skyepuppy.blogspot.com . So here I present to you some photos taken from around my town , this time focusing on circular objects and again different angles.
Posted by Dina at 7:07 AM 3 comments: